RABAUL - FLY FOR YOUR LIFE 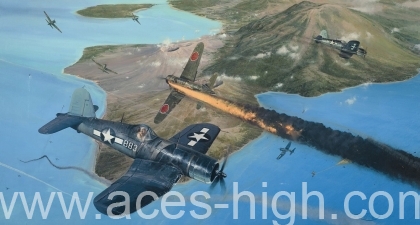 For their outstanding contribution to the war in the South Pacific, the 'Black Sheep' were awarded one of only two Presidential Unit Citations accorded to Marine Corps squadrons during the war in the Pacific.

Robert Taylor has brought to life an encounter over Rabaul in late December 1943, paying tribute to one of the US Marine Corps' most famous fighter squadrons, and its outstanding leader. With the Japanese airbase at Rabaul visible in the distance, 'Pappy' Boyington and his fellow pilots of VMF-214 tear into a large formation of Japanese Zekes and a series of deadly dogfights have started, one Zeke already fallen victim to their guns.

The Fighter Pilots Edition is signed by TWO of the leading 'Black Sheep' F4U Corsair pilots:

This is a very special Commemorative Portfolio issued with the signatures of no less than FOURTEEN of the famous 'Black Sheep' pilots, including four of the squadron's eight Aces. Released to include an individual ORIGINAL pencil drawing by Robert Taylor, widely acknowledged as the world's premier aviation artist, each pilot signed drawing is double-matted to include yet further signatures, including that of their legendary commander - 'Pappy' Boyington. Each drawing is a unique example of Robert's highlyprized creative skill with the pencil, and will feature the F4U Corsairs of VMF-214.