REACH FOR THE SKIES 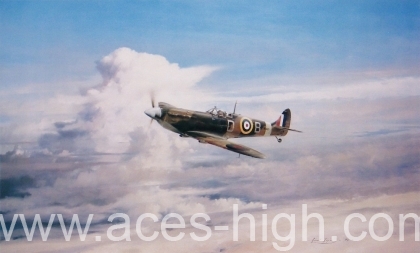 In 1931 Douglas Bader, then a brilliant 21 year old RAF pilot, crashed in a Bristol Bulldog fighter in a flying accident and lost both legs. At the outbreak of war his relentless persistence saw him re-join the RAF and by 1940 he was leading the famous 242 Sqn in the Battle of Britain. He then went on to cmmand the famous Tangmere Wing and at the time he was shot down and taken POW in August 1941, he was a leading Ace with 24 victories and one of the most famous RAF Fighter pilots. After being interned in a number of prison camps (including Stallag Luft III) his persistent escape attempts saw him finish the war in Colditz. After the war he became a household name and his Foundation gave a huge amount of support and encouragement to other limbless people.

“…I painted Reach for the Skies just before Sir Douglas Bader died. It was to have been issued as a limited edition print, carrying his signature. It depicts no special event. I felt I wanted to paint a picture of this quixotic fighter pilot, in his beloved Spitfire Mk.Va, high in his element. Douglas Bader had been a wonderful friend and, in some ways, a mentor during my early days as a professional painter of aviation subjects and I felt particularly moved when I did the painting. Sir Douglas never saw it. Had he done so he would probably have said: ‘Can’t you put a couple of Me109’s into the picture Robert, and liven it up a bit?’.”

Published in 1982 it was intended that the prints would be signed by Sir Douglas Bader. Sadly the legendary pilot passed away before it could be completed but the edition was released as a lasting tribute.

Each print is signed by artist Robert Taylor and has with a small portrait of Bader PRINTED in the left border.

Each print in these exclusive editions  was personally signed during her lifetime by Douglas Bader's wife:

A very limited number of Remarques are available, featuring one of Robert's highly collectible ORIGINAL pencil works, created to order in the border of the print.

Robert's original work is among the most highly prized in the industry and this is a great opportunity to acquire one of his current stunning pencil remarques on a classic masterwork.

We're delighted to offer a Publishers Proof which has been conservation framed to include a photograph and the original autograph of the legendary wartime leader: