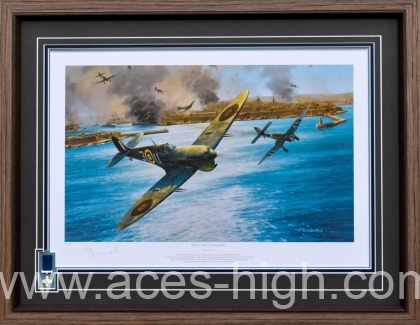 The air battles that took place over Malta that day were the largest ever witnessed over the diminutive island and the unexpected, Allied victory marked a turning point in the Mediterranean theatre. At the end of the day 57 enemy aircraft had been destroyed or damaged by RAF fighters and another eight had been shot down by flak. Never again would the Luftwaffe return with such force.

The framed limited edition depicts a glimpse of events that day in this eye-catching piece. In the foreground Sergeant Paul Brennan of 249 Squadron destroys a Ju87 in some of the fighting over Grand Harbour, Valetta whilst in the background the island’s anti-aircraft guns, boosted by a recent and much needed supply of ammunition, put up a huge barrage of flak.

Matted to full conservation standards, our expert team have included a miniature George Cross, the highest military gallantry award in the UK honors system, which was awarded to Malta and the people who showed great heroism and bravery against the Luftwaffe.