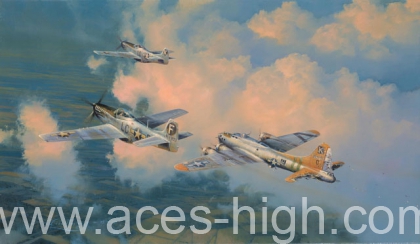 With machine gun turret positions in the nose, atop the fuselage, under the belly, in the tail, and with two side gunner positions, it was anticipated no hostile fighter would penetrate a B-17 defensive formation.  The sheer mass of defensive fire from a group of B-17s flying in geometrically calculated boxes would be enough to see off any Luftwaffe fighter pilot brave enough to make an attack.  But, at terrible cost, the B-17 crews quickly learned that their masters' theory didn't stand up when they met Messerschmit Me109 and Focke Wulf Fw190 pilots in mortal combat.  With no escort fighters to worry about, the Luftwaffe fighters circled their prey, carefully chose their line of attack, and ripped into the American bombers from angles they were least able to defend.  They were chopping the B-17s down seemingly at leisure.

Urgent change in USAAF tactics came in the form of close escort P-51 Mustangs, P-47 Thunderbolts and P-38 Lightnings, initially with limited range but enough to stem the flow of losses.  Soon, fitted with long range tanks, the American fighters were able to provide support all the way to targets deep inside the Reich, and this combination ultimately helped bring the industrial Germany to its knees.

Known to the bombers as "Little Friends," the escort fighters added massively to the effectiveness of the USAAF bombing operations, and were much loved by their crews.  Robert Taylor's evocative painting, Little Friends, depicts a scene typical of almost any 8th Air Force raid over enemy territory: P-51 Mustangs of the 20th Fighter Group provide close support for "Bit-O-Lace", the B-17 having sustained severe flak damage ove Kiel, Germany on 4 April 1945.  The "little friends" brought her home that day.

Each copy of Little Friends is issued with a matching numbered copy of Robert Taylor's Air Combat Paintings Volume V.

Every print in the edition has been signed by TWO highly regarded aircrew who flew combat with distinction during World War II.  Each print is also signed by Robert Taylor and numbered.