HUNTER IN THE NIGHT 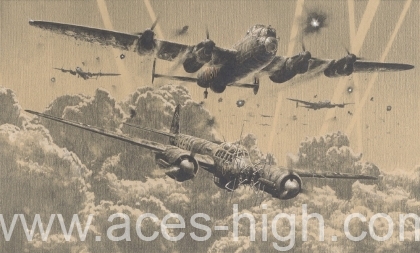 The role of the Luftwaffe’s night-fighter force was one of the most difficult and dangerous jobs of them all. Although highly feared, they were eventually overwhelmed by the sheer numbers and tactics as RAF Bomber Command increased their night-time offensive against the industrial heartlands of Hitler’s Third Reich. During their long, defensive campaign the Luftwaffe gave its night-fighter crews no time to rest, let alone recuperate – they often flew non-stop until they were either killed in action, wounded, or physically exhausted, incapable of flying. Only the lucky survived.

One of those who didn’t was Major Prinz zu Sayn-Wittgenstein, Geschwaderkommodore of NJG/2 who is skilfully depicted in Richard’s detailed drawing on the night of 21 January 1944, the fateful mission that would be his last.

Flying a Ju88 C-6 from Deelen airfield in the Netherlands to intercept a force of more than 700 RAF heavy bombers, he and his crew had managed to destroy five four-engine aircraft, including Lancaster DV263, KM-M from 44 Squadron portrayed in Richard’s drawing, before his Ju88 was itself hit and set ablaze. Although his crew baled out successfully, Sayn-Wittgenstein is thought to have struck his head when exiting his aircraft, and was killed. At the time he was the highest-scoring night-fighter pilot in the Luftwaffe with 83 victories to his credit, a tally that remained the third-highest by any night-fighter come the end of hostilities.

This highly-restricted edition remembers the exploits of the Luftwaffe’s night-fighter force in its long battle with RAF Bomber Command. All copies are hand-numbered and personally signed by artist Richard Taylor, before being mounted to full conservation standards to include the original autographs of both Luftwaffe and RAF veterans who duelled in the night skies over Europe during WWII.

Restricted to just 20 copies worldwide, each print is mounted to include the signatures of two highly-regarded pilots; one who flew Ju88s with the Luftwaffe, the other flew Lancasters in the RAF:

With all components of the Collector’s Edition, this highly prized Veterans Edition is limited to only TEN copies. Each print is matted to include the additional autographs of two more veterans who flew Lancasters with the RAF, plus a further two Luftwaffe veterans who flew Ju88s, including the exceedingly rare, wartime signature of the famous Ace depicted: