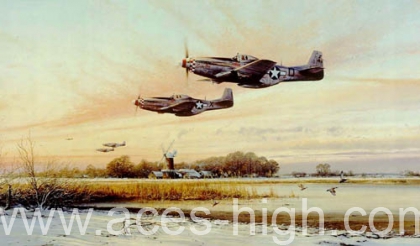 It’s winter 1944 and the snow has brought a special quiet to the countryside in the late evening twilight. The war seems a world away until the ear-shattering roar of Merlin engines re-focusses the mind on the realities of war-torn Europe. As dusk gathers and just feet above the gently waving reeds, P-51 Mustangs rush for home bearing the scars of the day’s battle; soon the tensions of aerial combat will be forgotten for a few hours, melting into an evening of camaraderie. Tomorrow will be another day.

Robert Taylor’s classic Masterwork depicts this life of extremes lived to the full by a special breed of men who flew this iconic fighter as the Allies pushed for victory in Europe during WWII. Tough, supremely confident, cavalier, determined, and gloriously brave; it was an era that belonged to them and an era that is more appreciated by the spell-binding artistry of the world’s leading military and aviation artist.

Each print has been personally signed by the artist along with six famous P-51 Mustang Aces: