HOLDING THE TIDE The battle for Guadalcanal 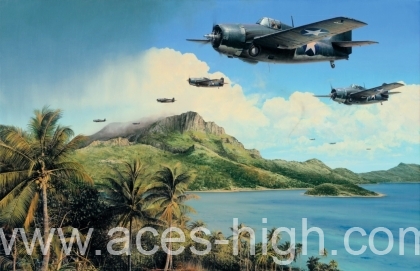 On 7 August 1942, just eight months after the dramatic events at Pearl Harbor, the United States First Marine Division stormed ashore on the island of Guadalcanal. It was the opening gambit of the land war in the Pacific.

Captain Joe Foss leads the F4F Wildcats of VMF-121 back to Henderson Field after a day of desperate fighting against the Japanese, in the skies over the steaming jungles of Guadalcanal - November 1942. It would be another three months before the island was finally secured, during which time Foss would achieve an astonishing 26 victories to become the first American pilot to equal WW1 Ace Eddie Rickenbacker’s score.

The limited edition has been individually signed in pencil by the artist and highly-distinguished Pilots who flew the Wildcat in combat, and fought in the Pacific Theater.

The Collectors' Edition and Remarques

This FOUR signature edition is additionally signed by two of the most decorated and famous exponent Aces of the Wildcat in aerial combat.

The Medal of Honor Tribute Edition

These magnificent Tribute Proofs, comprising the four signature print issued with a unique and highly-collectible ORIGINAL pencil drawing, are additionally issued with the matted signatures of no less than FOUR USMC holders of America’s highest military award for heroism, the coveted Congressional Medal of Honor - making EIGHT signatures in total.