FIGHT FOR THE SKY 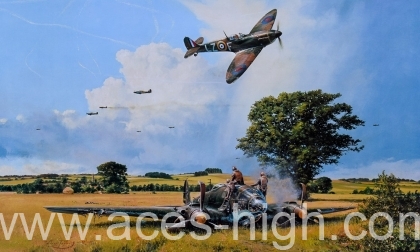 Robert Taylor's wonderfully realistic painting captures the very essence of an epic day during the Battle of Britain. A Heinkel III has been brought down, one of many never to make it home on this bright and sunny day. As the Luftwaffe bomber's crew emerge from their broken aircraft, relieved to have survived the crash-landing, a Mk I Spitfire from No 66 Squadron roars low overhead to verify another victory.

Each limited print of Fight for the Sky is signed by SIX Aces who flew Spitfires in the Battle of Britain.

One of the most outsanding Portfolios ever published, each print in the Millennium Proof Edition is additionally signed by EIGHTEEN Battle of Britain Spitfire pilots and each copy of 'Defiant To The Last' companion print was signed by TWO Defiant aircrew, making a total of TWENTY SIX Battle of Britain signatures!

The Millenium Proof Remarques also include the signature of: