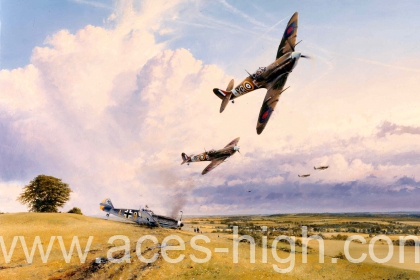 In the months that followed Dunkirk, the RAF stood alone against the might of the Luftwaffe and the massed forces of Germany preparing to invade Britain. While America anxiously watched events, some 240 pilots made their way to England to join the RAF in their herculean struggle against the overwhelming odds.

Motivated by the urge to fight for the cause of freedom, a swashbuckling sense of adventure, and a pure love of flying, this happy band of warriors set standards of courage, skill and fortitude that today are legendary. They were the American Eagles.

Released to commemorate the 50th Anniversary year of the formation of the Eagle Squadrons, their first aerial combats and their top-scoring achievements, this superb painting features Mk Vb Spitfires of No. 71 Squadron as they race low across the French countryside after combat with Luftwaffe fighters in 1941. Lying prey to the Eagles is a Me109 brought down during the dogfight, the lead Spitfire pilot clearly seen glancing down at his victim as the group dashes for the Channel and home.

Conferring great significance upon the commemorative limited edition, each print is signed by five lengdary Eagles, making this a print with which to forever record the courage, persistence and triumph of the legendary American Eagle Squadron.