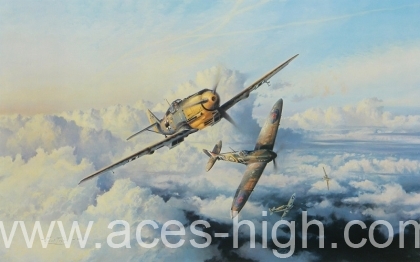 Throughout the six long years from the first to the last day of World War II, the Spitfire and Messerschmitt Bf109 were locked in combat. In the annals of aerial combat no two such evenly matched aircraft have fought so consistently over such a sustained period of time. And perhaps no painting captures the essence of those duels than Robert Taylor’s Eagles High.

Published in 1988 and signed by some of the most famous Aces of World War II – the RAF Aces Pete Brothers, Geoffrey Page and Johnnie Johnson, and the Luftwaffe Aces, Adolf Galland, Gunther Rall and ‘Macky’ Steinhoff – this print was described at the time as being “destined to become one of the great collector prints of all time”. That foresight was right, it did and mint copies are some of the most sought-after prints that we are asked for.

Each print in the edition is signed by six distinguished Fighter Aces - from both the RAF and the Luftwaffe.