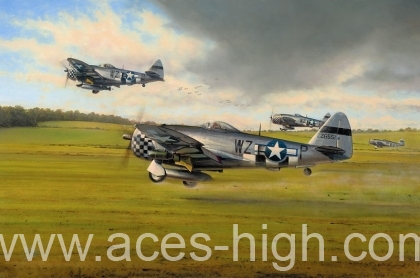 Duxford became home of the 78th Fighter Group when they arrives in England with their P-47B Thunderbolts in 1943. The objective of the American fighter units was to gain air superiority over the Luftwaffe in support of their daylight bombing campaign. By the end of 1944 they achieved their objective.

It is the spring of 1944, and with the Normandy invasion just days away, P47D Thunderbolts of the 78th Fighter Group, already painted with invasion markings, depart Duxford en route for the north coast of France, and a low-level strafing mission

This superb release by the hugely talented Richard Taylor commemorates the valiant contribution of the 78th Fighter Group during WWII.

Joining artist Richard Taylor in signing this outstanding tribute to the P47 Thunderbolt, each print in the entire edition is signed by some of the most respected P47 fighter Aces who flew combat over Europe during World War II.

Every print in this exclusive Fighter Aces edition has been signed by three additional P47 top fighter Aces, who all flew combat in Europe during WWII. There are a total of FOUR signatures in this edition.