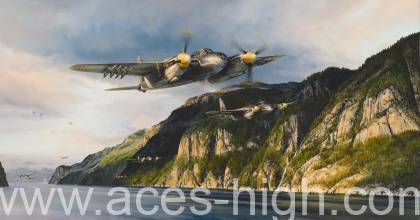 “It makes me furious when I see the Mosquito. I turn green and yellow with envy. The British, who can afford aluminium better than we can, knock together a beautiful wooden aircraft that every piano factory over there is building, and they give it a speed which they have now increased yet again. What do you make of that?...They have the geniuses and we have the nincompoops…”

The de Havilland Mosquito was arguably the finest multi-role combat aircraft of World War II and, remarkably, one of the few front-line aircraft constructed almost entirely of wood - few other warbirds were built for so many different duties. Amongst its countless roles it formed the core of Coastal Command’s legendary anti-shipping strike force, and it is this role that is the subject of Robert Taylor's thrilling painting, paying tribute to the Mosquito crews of World War II.

A large force of Mosquitos from RAF Coastal Command’s Banff Strike Wing exit a deep-sided fjord along Norway’s rugged, heavily defended mountainous coast. In the distance, smoke and explosions reverberate from their successful rocket strike against enemy coastal shipping, destroying yet another cargo of iron ore destined for the furnaces of Germany’s industrial war machine. Above them P-51 Mustangs provide top cover support should any patrolling enemy fighters decide to make an appearance.

Every print has been signed in pencil by THREE highly distinguished Mosquito aircrew, together with the artist Robert Taylor. Each print is individually hand-numbered.

Every print in these TEN signature editions, additionally signed by seven of the most highly experienced and well respected Pilots and Navigators who flew the Mosquito in combat over Europe: