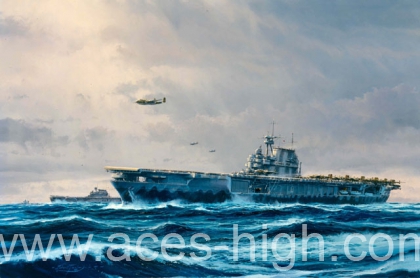 The charged atmosphere conveyed in Robert Taylor's powerful painting encapsulates the awesome tension at the start of the historic Doolittle Raid. As the USS Hornet pitches and rolls in the mid-Pacific Swell, the Tokyo raid gets under way. Jimmy Doolittle's B-25, safely airborne and having completed a 360 degree turn, flies over the carrier to check his compass while the number two aircraft rolls down the deck under full throttle.

Each of just 500 individually numbered prints in this sold-out and highly prized collector edition is signed by pilots and crew that flew the famous Doolittle Raid on that April day in 1942, providing collectors with what remains a rare opportunity to acquire a top quality limited edition print carrying so may authentic signatures of the famous Doolittle Tokyo Raiders.

Joining Robert Taylor in signing this important new edition are the following Doolittle Raiders aircrew who took part in the historic raid on Tokyo, 18 April, 1942.