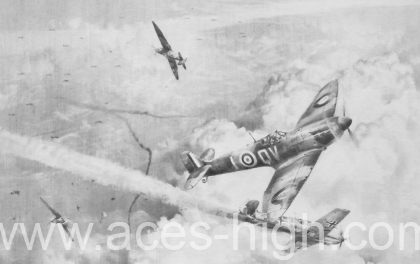 Just after midday on 27 September 1940 one of the bitterest engagements of the Battle of Britain took place in the skies over Kent when the Spitfires of 19 Squadron took on the Bf109s of JG54. In the huge dogfight that ensued, 19 Squadron claimed 8 enemy aircraft destroyed.

Robert Taylor’s outstanding drawing is a lasting tribute to the gallant young pilots who fought in the Battle of Britain and this is a great opportunity for all collectors of aviation art and memorabilia.

All prints in every edition have been personally signed by the artist Robert Taylor, together with two distinguished Battle of Britain Fighter pilots:

With the signatures of the Limited Edition, the highly-restricted Artist Proofs have been additionally signed by another eighteen leading Battle of Britain fighter pilots, and issued with a copy of the acclaimed book 'Memories of The Few' containing a signed bookplate:

With all the components of the Artist Proofs, these magnificent TWENTY SIX signature Tribute Edition prints have been conservation matted to include museum quality reproduction RAF Pilots Wings and the original signatures of five legendary Aces who fought in the Battle of Britain: