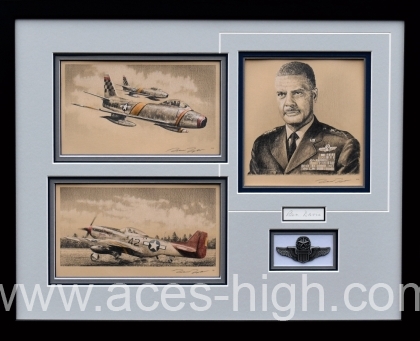 Commissioned as a Second Lieutenant in the infantry, Davis Jr was among the first African Americans admitted to the Army Air Corps for pilot training in the newly formed 99th Pursuit Squadron, (the first entirely African American unit), based at Tuskegee Army Airfield, Alabama, the original, ‘Tuskegee Airmen’. He successfully graduated in 1942.

Promoted to Lieutenant Colonel Benjamin was given command of the 99th Fighter Squadron, first seeing action in Tunisia, North Africa in 1943. Later that year Davis Jr returned to the United States to take command of the 332nd Fighter Group, (the famous Redtails), in preparation for its deployment to Italy and the Mediterranean Theatre where they would fly many missions deep into German territory.

In the Summer of 1945 Benjamin returned once more to the United States taking command of the all-black 477th Bombardment Group stationed at Godman Field, Kentucky.

Benjamin Davis Jr became the first African American officer to reach the rank of Major General in the Air Force in 1955 and was further promoted to Lieutenant General in 1965.

In 1988 Davis Jr was promoted to full General U.S. Air Force (retired), with the then President Bill Clinton pinning on his four-star insignia.

Three drawings in a single composition!

Completed in Richard’s trademark technique combining a mixture of graphite with colour highlights on antique buff paper, all three original drawings have been expertly framed to full conservation standards to include an original pencil autograph of the legendary man himself: