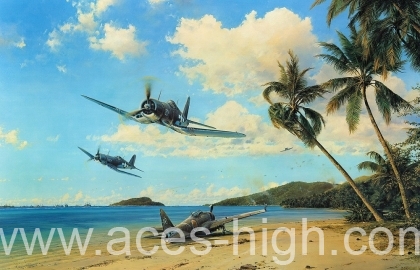 Vought’s distinctive gull-winged F4U Corsair was without doubt one of finest piston-engine fighters of all time, and few would dispute its claim to be the best carrier-borne aircraft of the Second World War. And whilst Corsairs served with distinction with the British, New Zealanders and later with the French, the F4U will always be best remembered for its Pacific operations in the hands of U.S. Navy and Marine Corps pilots.

A classic masterwork to be treasured for a lifetime!

Originally published in 1991 the limited edition print remains one of Robert’s most sought-after pieces. With all the unmistakable elements of a classic Taylor masterpiece the canvas sings to the roar of Pratt and Whitney engines as a gaggle of F4U Corsairs make a low-level strafing run on the lookout for ground targets in support of landings in the Marshall Islands in early 1944.

Below them a Japanese AM6 Zero lies decaying on the sandy beach, the victim of an earlier aerial contest whilst, in the distance, American naval vessels bombard enemy positions as landing craft bring the invasion force ashore.

Published as a limited edition at the end of 1991, prints were signed by five leading F4U Aces including two Medal of Honor recipients. Little wonder that it sold out within days of release and is always in demand on the Secondary Market. Now, thanks to the latest high-definition digital technology that prints directly on to fine grade canvas, Beach Head Strike Force is once again available to collectors – this time as the latest in Robert’s hugely popular series of artist-signed giclée proofs on canvas, creating the look and feel of the original painting.

Beach Head Strike Force will also be available as a highly exclusive Exhibition Proof - the extra-large size makes it an imposing centre-piece for larger spaces, such as reception areas, entrance halls, hangars or exhibition displays.