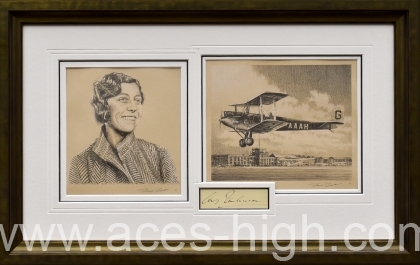 A superb tribute to one of the most famous female aviators in history...

Amy Johnson was a pioneering English Pilot and Engineer. In 1930 she achieved worldwide recognition, becoming the first woman to fly solo from England to Australia, a total of 11,000 miles. To achieve this she flew her beloved de Havilland DH.60 Gipsy Moth G-AAAH, named Jason, from Croydon airport as depicted in Richard’s detailed original pencil drawing.

Her later achievements were countless and she continued to break many records, including flying from London to Moscow in one day, solo flights from London to South Africa, and in 1934 she became the youngest President of the Women’s Engineering Society.

The onset of WWII saw her join the Air Transport Auxiliary (ATA) moving Royal Air Force aircraft around the country and she soon rose to the rank of First Officer. On 5 January 1941 she made her final flight, going off course in adverse weather conditions, reportedly out of fuel she bailed out of the aircraft which crashed into the Thames Estuary near Herne Bay.

In tribute to one of the most famous names in the history of aviation, Richard has completed these stunning drawings in his trademark technique combining a mixture of graphite with colour highlights on antique buff paper.

Both original drawings have been expertly framed to full conservation standards to include a RARE and fully-authenticated original signature of the legendary aviator herself: