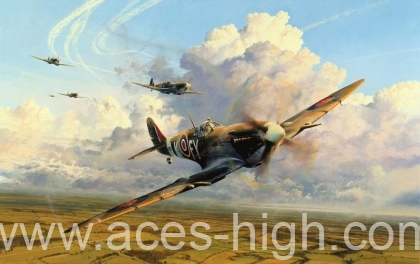 A flight of Spitfire MK IXs return to their base at RAF Kenley in July 1942 after a dog-fight with German Fw190s over France. The 611 Squadron pilots make the high speed run for home above the distinctive patchwork fields of southern England and the Channel coast visible in the distance.

Released in 1994 this outstanding portrait of the Spitfire by the worlds leading Aviation Artist was personally autographed by SIX of the most legendary RAF Spitfire Aces who were alive at that time.

Each print in the limited edition has been signed by the artist as well as:

Each print in this edition has been additionally signed by: