A TIME FOR HEROES 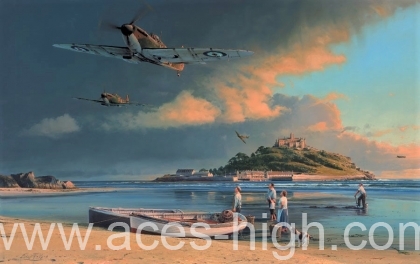 In this masterful painting, Robert Taylor pays tribute to the WWII fighter aircrews of the RAF and Fleet Air Arm. A panoramic scene from the era of the Battle of Britain shows Mk I Spitfires of 234 Squadron, 10 Group's top scoring squadron, returning to St. Eval after intercepting heavy raids on south coast ports during the heaviest fighting, in September 1940. St. Michael's Mount, the castle built on the site of a 14th Century monastery to defend Britain's shores from earlier enemies, provides a symbolic backdrop as once again a band of brothers is called upon to defend their Sceptred Isle.

The Fighter Pilots and Remarque Editions

With all components of the Fighter Pilots Edition, each print in the Veterans Edition is issued with a further companion print 'LONE GLADIATOR' which has been conservation matted to include the original signatures of: