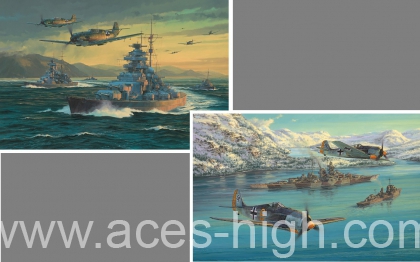 This atmospheric pair of prints featuring two of the most legendary German battleships of WWII are available individually or as part of a matching-numbered pair.

As Me109s from 3./JG77 and Me110s from ZG76 provide aerial cover, the pride of the Kriegsmarine - the battleship Bismarck - and her supporting escort fleet break out from Norwegian waters on the evening of 21 May 1941. Her ill-fated voyage would last only a few days; after a shattering victory over HMS Hood, Bismark was caught and sunk by the Royal Navy’s Home Fleet a few days later on 27 May 1941.

Each print in all of the editions has been hand numbered and personally signed by the artist as well as a very distinguished pilot who flew escort missions to the Bismarck in Norway with ZG76:

On the morning of 11 March 1943, Fw190s from IV./JG5 took off from their base to escort the mighty battleship Tirpitz and a screening fleet at the start of a voyage north to Bogen Bay during Operation Rostock. Intended to escape the increasingly frequent British bombing raids, Tirpitz would join an impressive German naval battle fleet gathering near Narvik.

Each print in every edition has been hand numbered and signed by artist as well as one of the few survivors rescued from the upturned hull of this battleship along with one of the last pilots to fly over the sinking vessel: