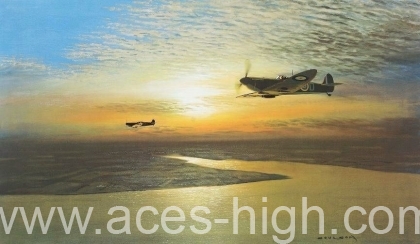 During the early part of WWI the coastline of Britain was constantly under threat, particularly the busy shipping lanes of the North Sea.

The RAF played a vital role in protecting these supplies, taking part on long range patrols that were often long and arduous for the young pilots taking part. Often fighter squadrons being ‘rested’ during the Battle of Britain, would be moved north to carry out these coastal patrols before returning to the more intense fighting in the south.

This superb piece captures the mood on one such patrol as Spitfires of 610 Squadron return to their base flying over the Humber Estuary as the sun sets in the distance, late in 1940.

Each print is hand numbered and personally signed by the artist along with EIGHT of the most respected and highest scoring Fighter Aces of the RAF, all of whom took part in such North Sea patrols during World War II:

The Artist Proofs and Remarques

Each print in these TWELVE signature editions is additionally signed by the following WWII Fighter Aces: