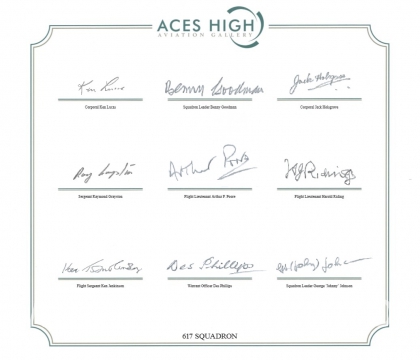 This bookplate is available to be issued in any copy of our artists' books and will be accompanied by a special edition Aces High slipcase.

It has been personally hand-signed by Pilots, Aircrew and Ground Crew who served with the famous 617 Squadron during WWII:

Squadron Leader BENNY GOODMAN
Pilot on over 30 Ops including raids on Brest, the Tirpitz and Berchtesgaden

Warrant Officer DES PHILLIPS
Flight Engineer on raids against the Tirpitz, Berchtesgaden and the Kembs Dam