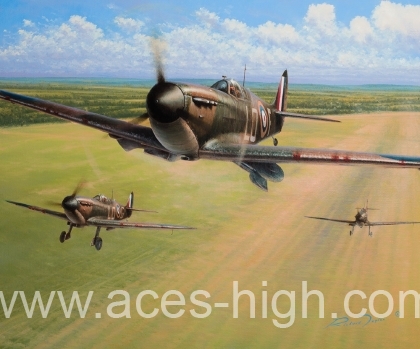 From the day they’d moved down from Scotland in early August, 602 Squadron had been in the front line of the air fighting over southern England, bearing the brunt of the Luftwaffe’s increasing attacks. Based at Westhampnett, a satellite of nearby sector station RAF Tangmere, under their commanding officer Squadron Leader Sandy Johnstone, they would become one of longest serving front line squadrons during the Battle of Britain and one of the highest scoring.

Richard’s exquisite cameo Spitfire Scramble depicts a typical daily scene at Westhampnett as Flight Lieutenant ‘Mickey’ Mount, flight commander with 602 Squadron, leads the final section of Spitfires away from the base in a frantic scramble to intercept another large Luftwaffe force heading towards the Royal Navy’s main base at Portsmouth and radar stations on the Isle of Wight in August 1940.

To add real collector status to the edition, each print bears the original signature of the pilot who had been with his squadron longer and flown more operational sorties during the Battle of Britain than anyone else – John Freeborn. Flying Spitfires with 74 Squadron, in that time he achieved seven victories to become a Battle of Britain Ace for which he was awarded the DFC.

Adding further historical significance, the highly-restricted Collector’s and Remarque Editions also include an exclusive and specially created portfolio to serve as a lasting tribute to the brave young men of RAF Fighter Command who fought so valiantly during this pivotal period in British history.

Along with artist Richard Taylor, every print carries the original signature of the following famous Battle of Britain Spitfire pilot:

These exclusive portfolios include a numbered copy of the veteran-signed print ‘Spitfire Scramble’ which is accompanied by a matching-numbered copy of the book ‘The RAF Battle of Britain Fighter Pilot’s Kitbag’ by historian Mark Hillier. Each portfolio is then complete with a specially-created commemorative signature ensemble which includes the original pencil autograph of a famous Battle of Britain fighter pilot:

With all components of the Collector’s Edition, each print in these highly-restricted editions will be returned to Richard’s studio and further enhanced with an original pencil Remarque, hand drawn in the border of the print.

Richard is regarded as one of the most gifted pencil artists in the industry and his original works are hugely sought after. It’s therefore no surprise that his Remarque editions are in such high demand.

Each Remarque is different to the next and completely unique making them very collectable.

Why not commission your own personal Remarque drawing?

Remarques are hand crafted to order so if you have a special request, such as a particular scene or specific aircraft markings, please just ask and we’ll do our best to accommodate.