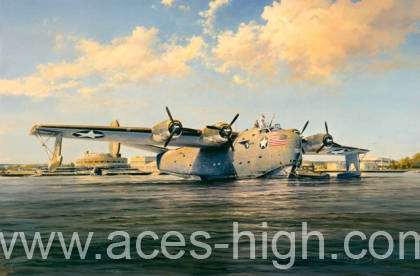 In the mid-1930s, at a time when Pan American had led the way with two generations of four-engined flying boats, the United States Navy sought a much larger, heavier flying boat for over-water reconnaissance bomber service.

Consolidated Aircraft’s PB2Y Coronado was the result, this massive all-metal flying boat first taking to the air in 1937. Several models and extensive modifications followed and in 1943-4 a number were converted for the Naval Air Transport Service for carriage of cargo and passengers and were flown by contracted Pan Am flight crews.

Each print in the edition is signed by the artist, and Pan American Captain William W. Moss who, on one notable occasion, landed in heavy seas to rescue 48 survivors from a torpedoed merchantman - lifting off in a 15ft swell to fly the oil-soaked seamen 300 miles to safety.