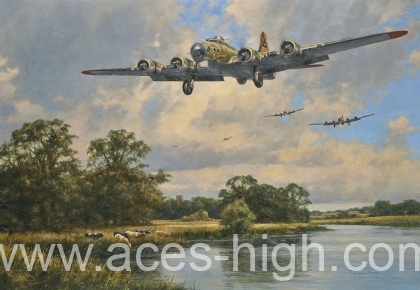 Commemorating the U.S. Eighth Air Force in Britain during WWII

America formally declared war on Japan on 8 December 1941 following the Japanese strike on Pearl Harbor, and three days later Germany, bound by treaty to Japan, declared war on the United States. The conflict that had been waging in Europe, now became global and it didn’t take long before the first units of the U.S. Eighth Air Force were firmly established in England. From their first official mission in August 1942, whilst RAF Bomber Command bombed at night, the American Eighth Air Force relentlessly pounded the enemy by day in a campaign pivotal to the Allied victory in Europe.

On 25 April 1945 the Eighth attacked the Skoda factory in Pilsen, Czechoslovakia – it was the last of 968 combat missions, involving over 523,000 sorties for what had grown to be the largest air force assembled in war. In its three year bombing campaign the Eighth dropped some 700,000 tons of bombs to inflict destruction on a scale from which Nazi Germany never recovered.

Almost 80 years since the first elements of the U.S. Eighth Air Force arrived in England and to remember the courage and sacrifice made by the thousands of airmen who served with the ‘Mighty Eighth’, artist Anthony Saunders has painted a beautiful piece worthy of the occasion. Entitled 'Return to Ridgewell', Anthony has selected the iconic B-17s from the 381st Bomb Group to represent all who flew and fought with the Eighth Air Force. They are seen returning from a long and arduous mission to Munich on 11 July 1944 and completing a last gentle turn low over the peaceful banks of the River Stour, they prepare to land at their home base nearby at Ridgewell. In the foreground is ‘Rotherhithe’s Revenge’, a B-17G from the 533rd Bomb Squadron that survived the war after completing a total of 122 combat missions.

Anthony’s work is now available as a limited edition print and we’re sure that this moving tribute piece will be of great interest to all collectors with a passion for the U.S. Eighth Air Force. Adding historical significance, part of the edition also includes the original signature of a highly regarded Navigator who flew with the 381st from Ridgewell as depicted in Anthony’s piece.

Each copy in these highly-restricted editions has been mounted to full conservation standards to include the original and authentic autographs of TWO highly regarded air crew who flew with the U.S. Eighth Air Force: