Home > Artists > Richard Taylor > OUT OF THE DRAGONS DEN

OUT OF THE DRAGONS DEN 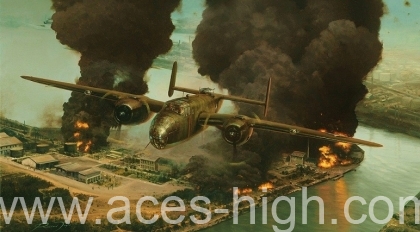 As the deck of the USS Hornet heaved under a mounting sea, sixteen B-25 Mitchell bombers under the command of Colonel James Doolittle lifted off into the wind.

It was the morning of Monday, 18 April 1942 and, taking a final look at the carrier rapidly disappearing into the distance, the B-25s headed west on what each of the five man crews knew was a one-way ride. With luck they might make it to Nationalist China but first they had an important mission to complete - destination Tokyo!

Richard Taylor’s powerful painting depicts the scene immediately after the Raiders had carried out their mission. One of the last B- 25 Mitchell's, having successfully bombed its target, makes its escape towards mainland China. As the navigator sets the new course, their path takes them close to targets hit by other Raiders, dark columns of smoke rising rapidly from the burning oil and carnage below.

Issued with a copy of Richards pencil print, USS Hornet, every one of these historic two print portfolio's is personally signed by Doolittle Raiders and a crewmember of the USS Hornet during the raid. This has already proven one of the most important editions in Richard Taylor's growing portfolio, providing what could be one of the final opportunities to acquire a limited edition signed by the last surviving veterans of the legendary Doolittle Raiders.

Along with artist Richard Taylor every print is personally hand signed by THREE veterans that took part in the Doolittle Raid.  Every print in every edition is issued with the companion print USS HORNET, personally signed by a veteran of the Hornet that was involved in the Raid.

Every print in these exclusive editions is additionally signed by another legendary Doolittle Raider, creating an outstanding FIVE signature collectors portfolio.

This NINE signature three-piece edition is issued with a unique and highly prized ORIGINAL pencil drawing by Richard Taylor, creating a historic three piece portfolio Each drawing is conservation matted to include Museum quality reproduction US pilots wings, Doolittle Raiders pin and the original pencil signatures of a further four Doolittle Raiders: