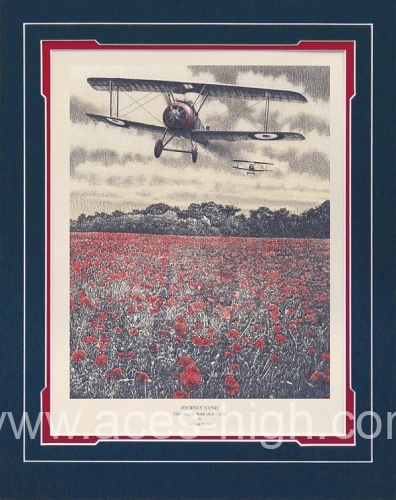 Germany, in retreat and humiliated by the failure of its great Spring Offensive, had sued for peace and an Armistice had finally been signed. The war described as ‘the war to end all wars’ was finally over but peace came at a terrible price; nearly a million soldiers from the British Empire alone had died and many more had been injured. Around the world it has been estimated that perhaps as many as 20 million people had perished in what had become one of the deadliest conflicts known to man.

To commemorate the centenary of that November Armistice, Richard Taylor has created a moving tribute to all the Allied soldiers who took part in that epic struggle. Fittingly, as an acclaimed aviation artist, he has chosen to do this with a powerful drawing that offers us a glimpse of one of the many aviators who pioneered a new form of warfare that, in the end, helped bring about final victory.

Journey’s End portrays the pilot of a Sopwith Camel in the colourful markings of 9 Squadron RFC who, as he coaxes his smoking and battle-damaged aircraft back to base, has relied on his wingman for support. Luckily their colleagues have successfully driven off the enemy fighter patrol and, with their home airstrip now in view just beyond the poppy field, today’s flight will end in safety.

Each copy is issued conservation matted, individually numbered and personally signed by the artist.

Regarded as one of the most gifted exponents of pencil work in the industry, Richard will hand-craft an original drawing in the lower margin of each print. If you have any particular request, such as specific aircraft markings, please ask when placing your order and we will do our best to accommodate.

Created especially for the serious collector, this edition is restricted to only TEN copies worldwide, and each print is enhanced with a unique double-size pencil drawing, once again finished in the graphite and paint combination that has made Richard one of the world’s most collected aviation artists.