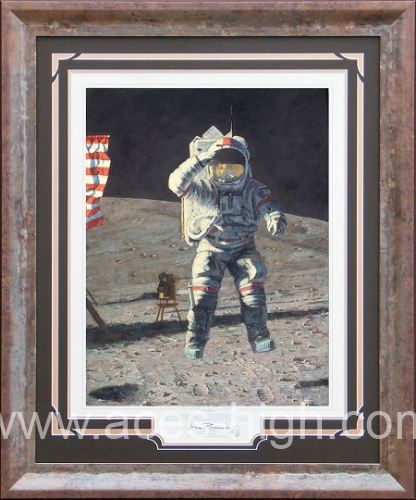 When John Young stepped foot on the surface of the moon in April 1972 he was just the ninth person to do so. It was his fourth space flight but his first lunar exploration and as commander of Apollo 16 took three moonwalks.

Alan Bean skillfully portrays the feeling many astronauts describe; not that of feeling lighter due to the lack of gravity, but a sense of feeling stronger.

“John has jumped straight up about 3 feet or so. On Earth, this would have been impossible because John weighs 160 pounds and the suit and the backpack weigh 150 pounds, but on the Moon everything (including John) weighed only one-sixth as much.’’

Bean continues: “Someday there will be athletic contests on the Moon, maybe even Solar System Olympics. The spacesuits will continue to improve and many astonishing records will be set. Just imagine being a high jumper, or a pole vaulter, or a shot putter, or a gymnast with a good, flexible spacesuit in light gravity. Watch out, record books!”

This superb piece has been personally signed by the artist and astronaut:

Other Works by Alan Bean