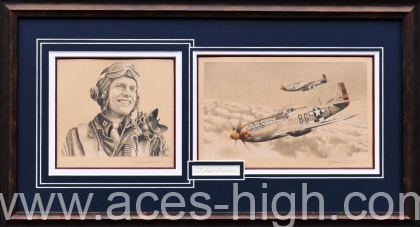 ‘Bud’ Anderson went to England in 1943 with the 357th Fighter Group who, based at Leiston, Suffolk, would become one of the most successful fighter groups in the U.S. Eighth Air Force. Bud quickly showed his natural talent as a fighter pilot, scoring his first victory with the 363rd Fighter Squadron on one of the early Berlin daylight escort missions.

After completing his first tour he volunteered for a second, arriving well in time to take part in the 357th's most successful mission of the war on 27 November 1944 when he added three more victories to his growing tally.

By the end of the war Bud had flown 116 missions and was credited with 16¼ air victories plus another on the ground to become the Group’s third highest-scoring Ace. During that time he was never hit by fire and never turned back for any reason.

Two drawings in a single composition!

Completed in Richard’s trademark technique combining a mixture of graphite with colour highlights on antique buff paper, both original drawings have been expertly framed to full conservation standards to include an original pencil autograph of the legendary man himself: