THE LIBERATION OF BAYEUX - Commemorative Card

by The Commemorative Card Collection 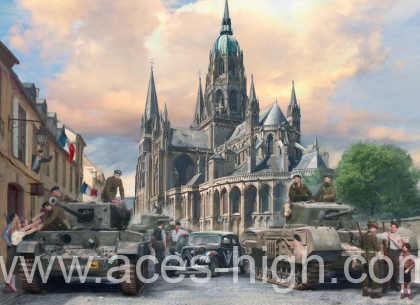 On the morning of 7 June 1944 British armoured units enter the centre of Bayeux, the first city in France to be liberated by the Allies following the D-Day landings. With the 11th century Notre Dame Cathedral as a magical back-drop, the crews of the Churchill and Cromwell tanks receive a jubilant reception from the local resistance fighters and civilians. A week later on 14 June, General de Gaulle, commander of the Free French Forces, would establish his new government here before Paris was liberated in August 1944.

Other Works by The Commemorative Card Collection