INTO THE NIGHT - Framed Collectors Piece 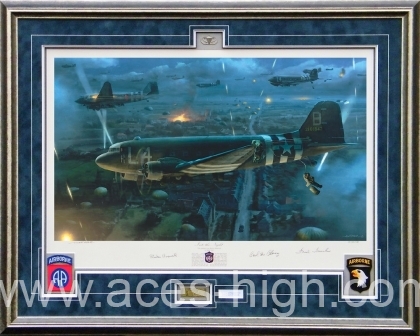 The Americans have arrived!

6 June 1944, soon after 1:00 a.m...across Normandy charge the C-47s of IX Troop Carrier Command and their fighting cargo, the paratroopers of the 101st and 82nd Airborne Divisions. They have come to liberate the oppressed. Braving walls of clouds, German flak, and with just the moon to shine their path, the pilots toggle the green light over French fields and villages like Sainte-Mère-Église, a sign to the paratroopers - Go! With church bells ringing below and the prayers of the world behind them, the boys of the 101st and 82nd Divisions brush fear aside and jump into the night.

Matt Hall's memorable piece depicts the paratroopers of the 82nd and 101st Airborne Divisions tasked with dropping into Normandy hours before the largest seaborne invasion in history. Thier main objective after jumping out of their C47’s was to take control of and hold key locations such as bridges and crossroads, denying German reinforcements access to the vulnerable landing beaches.

This outstanding collector’s piece has been mounted and framed to full conservation standards to include:

Joining the artist in signing the print are veterans of the 101st Airborne, 82nd Airborne and a C-47 Pilot:

Other Works by Matt Hall