IN DEFENSE OF LIBERTY - Original Oil on Canvas 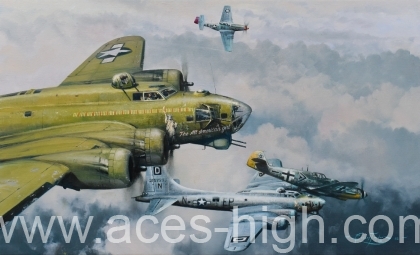 Harried by enemy fighters, B-17Gs of the 100th Bomb Group battle their way towards their target deep inside Germany, late 1944.

By late 1944 the American Eighth Air Force – the Mighty Eighth – were at last gaining the upper hand against the Luftwaffe. Ever since they’d arrived in England in 1942 they’d had to battle hard against a resilient and deadly enemy air force, but as the years wore on the Luftwaffe were increasingly unable to stem the tide.

Paying tribute to the courage of those who flew with the Mighty Eighth, Robert Taylor has once again demonstrated why he’s considered the world’s foremost aviation artist in his dramatic new painting In Defense of Liberty.

In doing so he has selected B-17 Fortresses from one of the Eighth’s most famous units, the 100th Bomb Group or ‘The Bloody Hundredth’ who were based at Thorpe Abbotts in Norfolk. As a Messerschmitt Bf109 makes an audacious diving attack through the edge of the bombers combat box formation, B-17G ‘The All American Girl’ thunders on towards the target alongside B-17G ‘Humpty Dumpty’. Spotting the danger from above, however, a P-51 escort from the 357th Fighter Group is quickly on the scene ready to help.

We’re rarely able to offer new original paintings by Robert so we’re sure this striking new piece will cause a stir!

Viewing is highly recommended – either in person or we can arrange a personal video walk-through. CLICK HERE to find out more.