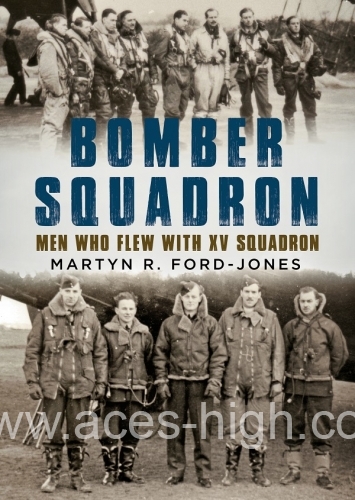 Based on personal interviews, Bomber Command aircrews who served with XV Squadron reveal the horrors of operations over Nazi Germany!

During the Second World War, thousands of young men volunteered for service with the RAF. Some became fighter pilots, but a great many more were destined to be trained as bomber aircrew – pilots, navigators, wireless operators, bomb aimers, gunners and flight engineers.

On completion of their training, a number of these recruits were posted to XV Squadron, a highly-regarded frontline bomber squadron, which had been formed during the First World War. BOMBER SQUADRON: Men Who Flew with XV Squadron relates the personal stories of a small number of these men, giving an insight to their anxious moments when flying on operational sorties, staring death in the face in the form of prowling night-fighters and ground fire, and relaxing during their off-duty hours.

The book also reveals the motivations, emotions and personal attitudes of these men who flew into combat on an almost nightly basis. Their stories encompass the whole six years of the war where XV Squadron flew various bomber types, including Fairey Battles, Bristol Blenheims, Vickers Wellingtons, Short Stirlings and Avro Lancasters.

Other Works by Martyn Ford-Jones