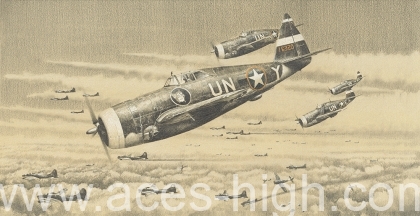 P-47s from the 63rd FS, 56th FG dive at speed to strike at the German fighters attacking the lead formations of B-17s returning from Schweinfurt, 17 August 1943.

Exactly a year after the Eighth Air Force had carried out its first ‘official’ mission of the war, on 17 August 1943 a huge force of 377 B-17s, was about to embark on the Eighth’s most ambitious undertaking to date – a complex two-pronged ‘double strike’ deep into the heart of Bavaria.

The first of the strikes would see Colonel Curtis LeMay lead 147 B-17s across Germany to bomb the large Messerschmitt factory complex at Regensburg. The second strike called for an even larger force; some 230 Fortresses headed for the anti-friction ball-bearing factories at Schweinfurt.

Richard’s detailed piece shows the returning Schweinfurt force coming under attack from Luftwaffe interceptors. However, ‘Hub’ Zemke and P-47s of the 56th Fighter Group, tasked with protecting the returning bombers over Belgium, quickly dive into action, taking the Germans by surprise. The fighter pilots of the 56th FG quickly destroyed 17 Luftwaffe fighters and, much to the relief of the bomber crews, finally drove the enemy away.