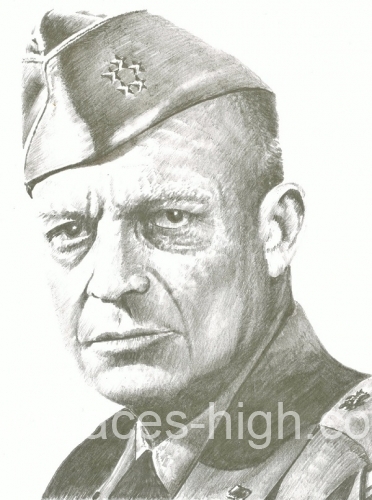 As Supreme Commander of the Allied Forces in Europe, General Dwight D. Eisenhower was fundamental to D-Day and the liberation of occupied France.
On 5 June, the eve of D-Day, Eisenhower gave the order to commence Operation Overlord, and each member of the expeditionary force was issued with a copy of General Eisenhower’s Order of the Day for June 6, D-Day.
Intended to rally and galvanize the troops for their historic mission, the letter began:
"Soldiers, Sailors and Airmen of the Allied Expeditionary Force!
You are about to embark upon the Great Crusade, toward which we have striven these many months. The eyes of the world are upon you. The hopes and prayers of liberty loving people everywhere march with you. In company with our brave Allies and brothers in arms on other fronts, you will bring about the destruction of the German war machine, the elimination of Nazi tyranny over the oppressed peoples of Europe, and security for ourselves in a free world."

Following victory in Europe the troops were then issued with a copy of Eisenhower's Relinquish of Combined Command letter.

We have acquired just one of each of these historic and collectible wartime documents and as a lasting tribute our expert team have framed these letters alongside a superb ORIGINAL pencil portrait by Richard Taylor, one of the world’s foremost pencil artists, which perfectly captures this great man.