Home > Artists > Military Gallery > THE MIGHTY EIGHTH - A GLIMPSE OF THE MEN, MISSIONS & MACHINES OF THE U.S. EIGHTH AIR FORCE 1942-45 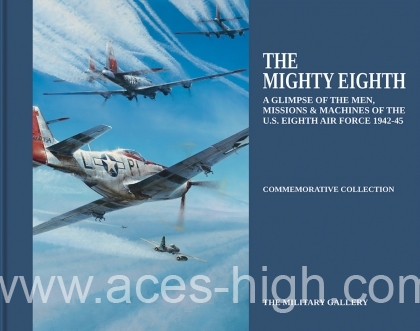 The heroics of the airmen who served in the United States Eighth Air Force and fought in the embattled skies of Europe during World War II are legendary. When in 1942 they commenced their campaign against Nazi Germany, their arrival sent a deep shudder of despair through the German High Command. For the next three years, whilst RAF Bomber Command bombed at night, by day the American Eighth Air Force pounded the enemy war machine to its knees until, by May 1945, victory had finally been won.

This commemorative book provides a unique glimpse into the lives of some of the men and machines that fought in that bitter, often titanic struggle, together with some of the extraordinary missions they flew.

Beautifully illustrated using an unparalleled collection of paintings, drawings and specially created maps and diagrams from the archives of the Military Gallery, this book is not simply a collection of artwork; first and foremost it is a historically accurate recollection of events, painstakingly researched with the assistance of leading historians.