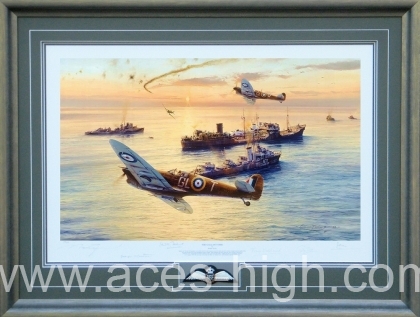 During 1942 the small Mediterranean island of Malta was the most heavily bombed place on earth. In the space of two months, March and April, more bombs fell on Malta than on London during the entire Blitz. The Axis powers were determined to bomb the island into submission because, if they could capture Malta, the Mediterranean was theirs.

But the garrison and people of Malta refused to submit, their only relief was through the convoys that ran the gauntlet to resupply the island. And none more so than the convoy of Operation Pedestal, a scenario of which is played out in Robert Taylor’s panoramic painting, THE GALLANT OHIO.

Unless the American tanker got through, the island’s air defences were doomed. Spitfires of 126 and 185 Squadrons successfully fended off a last desperate attempt by enemy aircraft to sink the crippled American tanker Ohio, still some 80 miles short of the beleaguered island of Malta. Badly damaged and barely afloat the Ohio, assisted by Royal Navy destroyers Penn, (foreground), Bramham (lashed to Ohio’s port side) and Ledbury, limped into port to a tumultuous welcome, on August 15, 1942. Her vital cargo of fuel kept the island’s air defences alive, and ultimately made the island secure. Pedestal became the most heavily attacked convoy in history but, it got through and Malta was saved.

This Limited Edition print has been expertly framed to full conservation standards and is personally signed by FIVE distinguished veterans representing the Royal Navy, Fleet Air Arm, and the Royal Air Force, who fought for the Defence of Malta and the Malta Convoys: