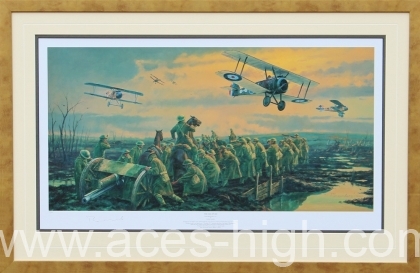 On 28 July 1914 the unthinkable happened, a great war to ‘end all wars’ began. Four weeks earlier shots were heard on the streets of Sarajevo, and Archduke Frans Ferdinand, heir to the Hapsburg Empire, and his wife lay dead, victims of a Serb nationalist assassin. The major powers had quickly taken sides and Europe found itself heading towards the most brutal war it had known. By the time it ended, four years later, an estimated 10 million had been killed and twice that number wounded and Four Empires – the German, Russian, Austro-Hungarian and Ottoman – had ceased to exist. Europe would never be the same again.

To commemorate one of the most significant anniversaries in history, Anthony Saunders has created a powerful new painting portraying the bleak sacrifice made by so many heroic young men. The names of the bitter battles they endured, however, still live on a hundred years later – Ypres, the Somme, Vimy Ridge, Arras, Loos – and one of the most savage – Passchendaele.

The Battle of Passchendaele lasted for four months and ended in November 1917. Nearly a quarter of a million British, Canadian and New Zealand troops died while fighting for control of the ridges to the south and east of Ypres. It was a high price for victory.

This outstanding painting depicts men and horses of the Royal Field Artillery, swamped by mud in a desolate, shattered landscape, dragging their 18 pounder fieldgun towards a new position on 15 November 1917, during the final days of the battle. Whilst the army continues its grim fight on the ground, overhead Sopwith Camels from 45 Squadron Royal Flying Corps tangle in a deadly duel with German Albatros fighters of Jasta 6.

Flying the lead Sopwith Camel is the RFC Ace Second Lieutenant Kenneth Montgomery. He scored the last of his 12 victories in this dogfight when he shot down the German Ace Leutnant Hans Ritter von Adam, the Commanding Officer of Jasta 6 with an impressive 21 victories to his name.

This dramatic and moving piece has been framed using the highest quality materials. Alternative mount colours and framed are available - contact us to discuss further.