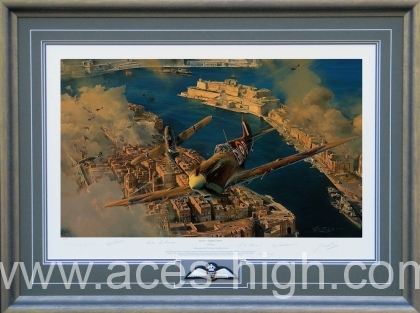 The RAF’s desperate fight to retain control of the diminutive Mediterranean island, and the defiant courage of the people of Malta, is one of the epic stories of WWII. Between the summer of 1940 and the end of 1942, Malta became one of the most bombed places on earth. In the space of two months, March and April, more bombs fell on Malta than on London during the entire Blitz. The Axis powers were determined to bomb the island into submission because, if they could capture Malta, the Mediterranean was theirs.

Originally released in 2002, Robert’s famous piece depicts the Spitfire of Pilot Officer John Bisley of 126 Sqn in combat with Bf109s from JG-53 during one of the intense aerial air battles over Valetta in April 1942.

This superb Malta Edition print is issued with a matching-numbered companion HMS ILLUSTRIOUS and the pair has been expertly framed to full conservation standards.

A combined total of nine highly decorated pilots who flew in the defence of Malta have signed the prints including Art Roscoe who, at the time of signing, was the only surviving American pilot to take part in the siege: