INTO THE FIRE – OPERATION TIDAL WAVE - Original Oil on Canvas 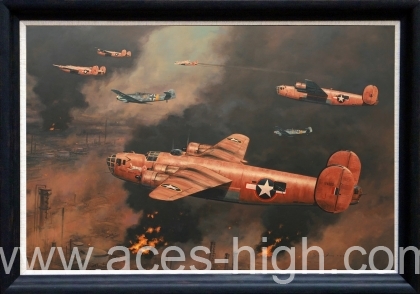 Facing the full effects and heavy smoke of the raging oil fires below, B-24 ‘Fertile Myrtle’ and Liberators of the 98th Bomb Group pass over the Astra Romana refinery at Ploesti, 1 August 1943. Allied planners knew that if these oilfields could be destroyed it would deal a savage blow to Hitler’s armies so it came as no surprise to the brave bombers of the Ninth Air Force that both the German and Romanian defences were on full alert.

The risks were enormous, the odds of success minimal, but should they succeed the rewards were great. “We expect our losses to be 50%” said the Commanding Officer of the Ninth Air Force, “but even though we should lose everything we’ve sent, but hit the target, it will be well worth it.”

At first light on 1 August 1943 a force of 178 B-24 Liberators lifted off from dusty airstrips in the Libyan desert to fly the 2000 mile round-trip deep into enemy territory – without fighter escort. However, the German radars picked up the incoming threat and the element of surprise was lost, the enemy were waiting. Despite the barrage of fire and barely being able to see through the dense black smoke and pillars of flames, the B-24s held their course to run the deadly gauntlet.

The mission was the second-worst loss ever suffered by the USAAF on a single mission with the loss of 53 aircraft and 660 aircrewmen. Five Medals of Honor and 56 Distinguished Service Crosses along with many others decorations were awarded to Operation Tidal Wave crew members.

Anthony’s dramatic and powerful painting brings this daring raid to life in tribute to the heroes who flew the epic Operation Tidal Wave.