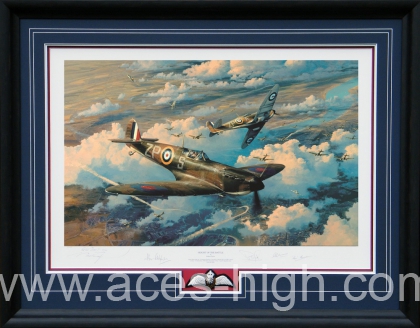 Fighter Ace Harbourne Stephen of 74 Squadron prepares to turn his Spitfire into a diving attack on Heinkel 111’s at 20,000 feet above London, during the Battle of Britain, 11th September 1940. Leading the unit the legendary Ace 'Sailor' Malan has already begun his attack and below them the Hurricanes of No’s 17 and 56 Squadrons have joined the battle.

Originally released in 1996, this superb piece pays tribute to the Spitfires and Hurricanes that served their pilots so well during the Battle of Britain. One of Robert’s most collectible pieces on the Secondary Market, the edition is long sold out so we are delighted to have this copy available.

Included in this two-print edition is the matching-numbered companion print MAPLE LEAF SCRAMBLE which features Hurricanes of No.1 Sqn RCAF and commemorates the part played in the battle by Canadian Air Forces.

This amazing portfolio carries the original signatures of EIGHT Battle of Britain RAF and RCAF aircrew including HARBOURNE STEPHEN who features in the piece, and Canadian Senator HARTLAND MOLSON. All have sadly now passed away making this edition impossible to replicate: