GET OUT NOW - Original Pencil Drawing 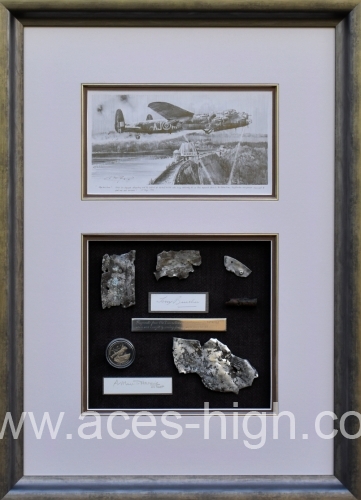 The first of three primary targets for 617 Squadron on the night of 16/17 May 1943 was the mighty Möhne Dam, the largest dam in Europe controlling a vital source of water to the industries of the Ruhr valley.

“As we came over the hill we saw the Möhne Lake. Then we saw the dam itself. In that light it looked squat, and heavy, and unconquerable” - Wing Commander Guy Gibson

The dam held after Gibson’s first attack so he soon called up his deputy ‘Hoppy’ Hopgood in Lancaster AJ-M with the words ‘Hello, M-Mother, you may attack now. Good luck’.

‘OK, attacking’ came the brief reply. It was the last transmission Hopgood would ever make.

As AJ-M approached the dam the flak teams below had adjusted their guns; they knew exactly where the next attack was coming from and threw up a solid wall of fire. AJ-M was badly hit and in all the chaos their Upkeep was released a fraction too late – bouncing right over the top of the dam and landing on the power station below where it exploded. Hopgood, knowing M-Mother was stricken, struggled to gain altitude in a desperate attempt to allow the crew time to bale out.

Incredibly three did so including the Australian Rear Gunner, Tony Burcher.

This moving collector’s piece depicts the moment Lancaster AJ-M overflies the great dam, just moments before plunging to the ground. Included in the matting are fragments of fuselage recovered from the crash site of Hopgood’s Lancaster along with the original autograph of the Rear Gunner, plus the signature of the Commander in Chief of Bomber Command at the time of the raid: