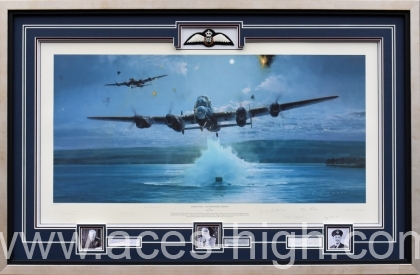 On the night of 16/17 May 1943 Lancasters of 617 Squadron breached the mighty Dams in the Ruhr Valley in one of the most remarkable precision bombing raids of WWII – a mission all but a few thought was impossible. Here 'Dinghy' Young, flying Lancaster AJ-A, heading through flak and machine gun fire towards the Möhne Dam at precisely 60ft, has just released his bouncing bomb 'Upkeep' – clearly visible against the huge splash created as it hits the water. The mighty Möhne Dam has but moments to live.

Published in 2006 this stunning piece has become one of the most collectible editions in Robert’s extensive portfolio and a ‘must have’ for Dambuster enthusiasts the world over.

This Collector's Edition print boats no less than SEVEN signatures of veterans who participated in the raid:

Making this a completely UNIQUE piece, our expert team have included the ORIGINAL and fully authenticated signatures of three famous veterans who were instrumental in the planning and execution of the raid:

Then completing this special Book & Print Portfolio is a rare and exclusively signed copy of the commemorative book; The Bomber Command Memorial - We Will Remember Them

This special book commemorates those who served in Bomber Command throughout the Second World War. Considered as some of the most courageous and integral members of the war effort - the success of their missions was essential in turning the war in favour of Allied forces.

In tribute to all those who served with RAF Bomber Command, this superb book has been personally signed for authenticity by TWELVE courageous WWII veterans including the daughter of Sir Barnes Wallis: