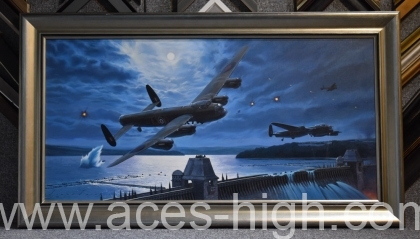 With Guy Gibson in Lancaster AJ-G and Mick Martin in AJ-P both drawing the enemy’s fire, it’s the turn of David Maltby at the controls of AJ-J to press home the attack on the Möhne Dam. With his Upkeep mine skimming the surface of the lake, Maltby powers his Lancaster over the already-damaged dam, just seconds after releasing his bomb. The dam has but moments to live.

Simon’s dramatic piece serves as a lasting tribute to the brave aircrew who took part in perhaps the most daring air raids of the war.