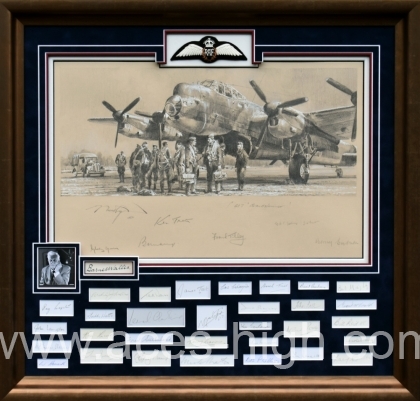 The most powerful non-atomic bomb used during WWII, the ‘Grand Slam’ was designed by the aeronautical genius Barnes Wallis and simulated an earthquake in order to cause widespread damage to its targets' foundations.

Forged by their unique link to Wallis, 617 Squadron will always be remembered as one of the foremost RAF Bomber Command units during WWII. After successfully delivering the ingenious ‘Upkeep’ bouncing-bomb on the audacious low-level assault against the great dams of Western Germany on the night of 16/17 May 1943, they later released the 12,000lb ‘Tallboys’ before the massive 22,000lb 'Grand Slam' was introduced.

617 were the only squadron to use these mammoth weapons in anger, and it’s one of their modified Lancasters that forms the basis of Robert’s atmospheric NEW drawing.

Adding great authenticity, the drawing has been completed on antique buff paper personally signed by SIX veterans who served with 617 Squadron during the Second World War.

To create a completely unique THIRTY EIGHT signature piece, our in-house framing team have included within the matting the original autographs of some of the most famous names to serve with the unit during the war, PLUS a photograph and signature of the legendary designer who contributed so greatly to the success of the squadron.